Performance of All Alumni Ventures Funds, as of March 31, 2022

Current Valuation, MOIC (Multiple on Investable Capital), and Cash-on-Cash Return are metrics describing the total “paper valuation” of the portfolio. This includes realized distributions already paid out and unrealized changes to a company’s valuation based upon a closed round of financing. Except for Amounts Returned there is no assurance that any additional value can be obtained in the future.

Often, one can expect the MOIC to be around one and the Cash-on-Cash Return to be less than one in the early years. Winning companies typically take some time to shine, while losing companies usually struggle to scale and fail early. All funds are 10-year funds, and most need 6+ years to mature before a clear view of performance can be seen.

According to Cambridge Associates, fund performance takes quite some time to become meaningful: Based on analysis of over 2,000 private investment funds raised between 1995 and 2005, “most funds require about six years before they ‘settle’ into their ultimate quartile rankings as measured by IRR.”

Summary of Alumni Ventures Pricing Events, as of March 31, 2022

A Note About Valuation

Valuations reflect the total fair value of the portfolio as determined in good faith by AV according to its valuation policy.

Unrealized investments are recorded at cost, and are only re-valued upon consummation of an arm’s-length transaction, either an Up-round or Down-round in a portfolio company, in accordance with this policy, or written off as a total loss if AV so determines. Up-round generally means a financing subsequent to AV’s investment has occurred at a higher per-share valuation (more favorable) than AV’s original investment. Down-round generally means a subsequent financing has occurred at a lower per-share valuation (less favorable) than AV’s original investment. Amounts Returned is based upon an amount received in the event of an Exit (such as an acquisition by an acquirer) or an initial public offering (IPO), or similar proceeds. Exits include escrows and amounts receivable at a future date but do not include contingent compensation that may not be realized. Public holdings are publicly traded securities priced at market value as of the last day of the period.

The table below reflects each Exit of a portfolio company investment from an Alumni Ventures Fund from 04/01/21 to 03/31/22. Only certain AV funds invested in any particular investment appear in this table. This table, or any portion of it, does not represent the investment experience of any specific investor. This table does not include the many AV fund investments that have not yet experienced an Exit, and those investments may fare better or worse than those in the table. The names of the portfolio companies and the exact dates of investments and exits have been hidden due to confidentiality requirements of the companies. 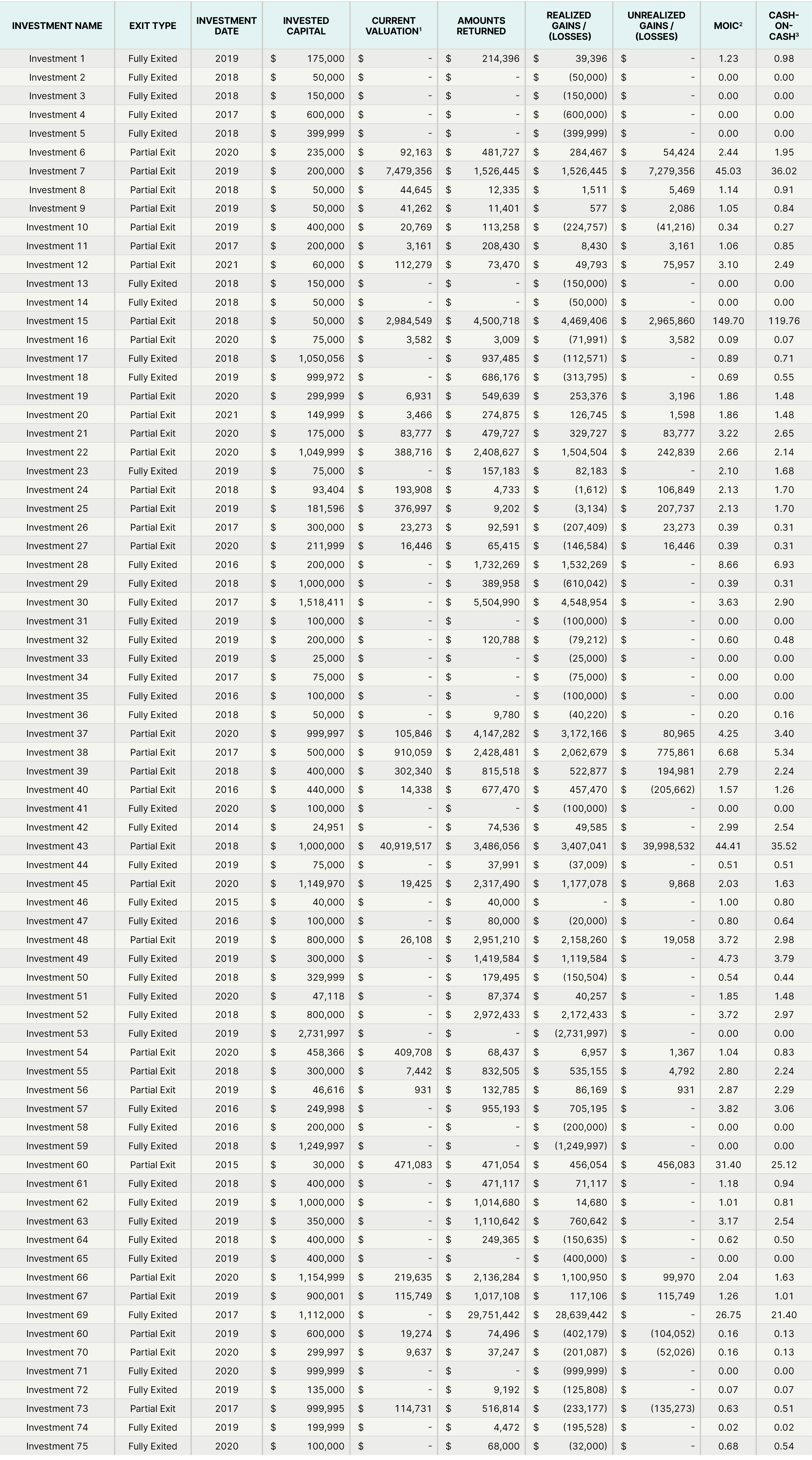 The table below reflects the total from each exit of a portfolio company investment from an Alumni Ventures Fund since inception.

The manager of the AV Funds is Alumni Ventures (AV), a venture capital firm. AV and the funds are not affiliated with or endorsed by any college or university. These materials are provided for informational purposes only. Offers of securities are made only to accredited investors pursuant to each fund’s offering documents, which describe among other things the risks and fees associated with the Fund that should be considered before investing. The funds are long-term investments that involve a substantial risk of loss, including the loss of all capital invested. Past performance is not indicative of future results. Opportunities to invest in any security (of a Fund, of AV or in a syndication offering) is not a guarantee that you will be able to invest and are subject to all terms of the specific offering. Diversification cannot ensure a profit or protect against loss in a declining market. It is a strategy used to help mitigate risk.